This will be the third in a series of monthly reports I am calling 'The Road to the Globe40'. These reports will chronicle the preparations Team GryphonSolo2 is making for this round-the-world race which starts in June 2021 and finishes in March 2022. In my first report in July, I was interviewed by Sailing World's Dave Reed about how I decided to sail around the world again. In the second report, I talked about our last training sail of the year, on a balmy day in September in Portland, Maine. But before proceeding to article 3, a quick note- there were three photos in the last report that were taken by noted marine photographer Billy Black that were not given proper credit. This was an oversight on my part and I feel awful about it since Billy has been a huge supporter of US offshore short-handed sailing going back to the 1980's days of the AroundAlone Race. Billy and his wife and business partner Joyce have chronicled every major ‘round-the-world race as well as being huge supporters of the Atlantic Cup Race, which is America's premier Class 40 event. So thank you Billy and Joyce for your years of support- we all appreciate it very much.

GS2 had her mast removed and came out of the water in early October at Maine Yacht Center in Portland. She had her keel and rudders removed and rolled into the paint shop and was blocked about 4' off the ground to have the non-skid deck paint re-done and to sand and re-paint the bottom. However, as the boat is coming up on 10 years old and has been around the world once, we did a complete inspection, sounding and survey of the hull and deck and found quite a few areas of delamination, where the core material (balsa or foam) had separated from the inner and/or outer skin of fiberglass. When this separation occurs, the structural integrity of the hull or deck is compromised and must be fixed, or the problem will only get worse. The composites team at MYC is top-notch and they have seen and repaired this type of delamination problem in race boats many times before, so they set to work and moved quickly though the stages of the repairs.

On the deck, we removed all hardware (winches, jammers, pad-eyes, etc.) and sanded the deck back to the primer and repaired all damaged areas (Photo #1 below). All non-skid areas were taped off and the painting began with two coats of primer (sanding in- between) then 3 coats of non-skid (Photo #2 below).

So the boat has rolled out of the paint shop and the keel is being made ready to re-install, but that will be the subject of the next article. The rudders are also getting an overhaul and all of the deck hardware that was pulled off has to be carefully re-installed, so that is what Rob Windsor and I will be focused on post-Thanksgiving through Christmas. For now, I feel grateful that we were able to identify and repair some major structural problems that would definitely have shown themselves at some point over upcoming 30,000 nm circumnavigation. I have also been in frequent touch with Globe40 race Director Manfred Ramspacher and he is working hard through these difficult pandemic times to keep the race on track with all the competitors and stopover ports around the world.

See all photos below in chronological order and with a few other details of the boat prep process.

Happy Holidays to all!

Hope you are all following the Vendee globe www.vendeeglobe.com RTW race 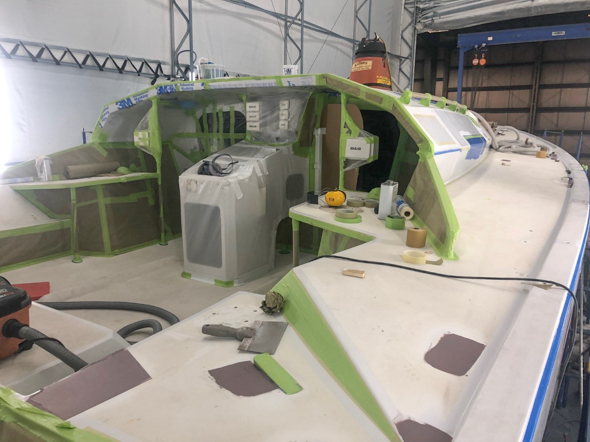 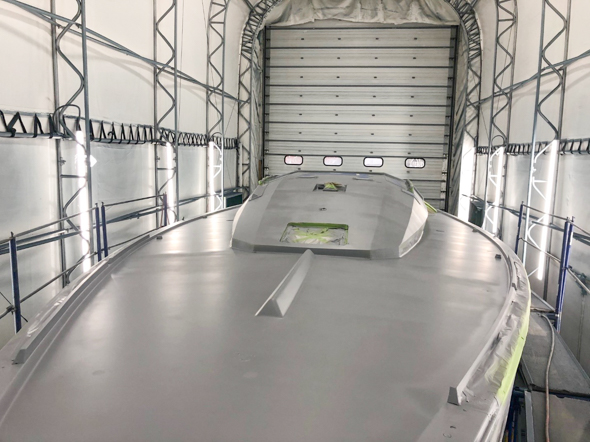 You can see from the photo that the foredeck area had to be done in 'International Orange' with the hull number 106 so that if the boat was in distress, it could be seen and identified by a plane or helicopter (see photo). 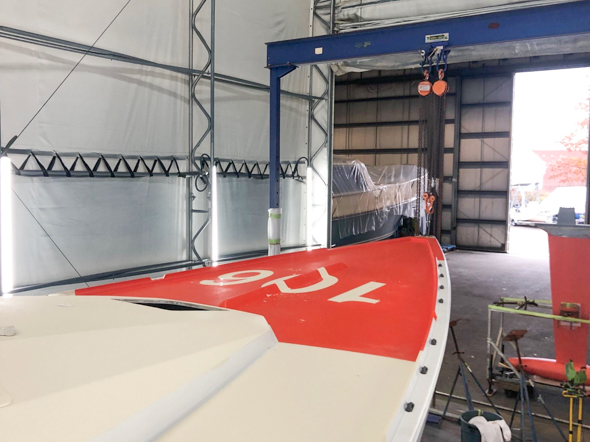 The finished product looks like a new boat and the sticky non-skid deck surface will provide secure footing even when wet to myself and my co-skippers when offshore. 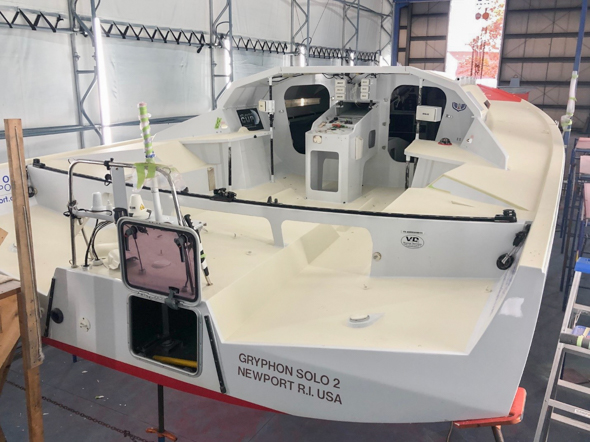 Below the waterline, we found a significant are of delamination on the starboard side forward, which was quite large and troubling (see photo). 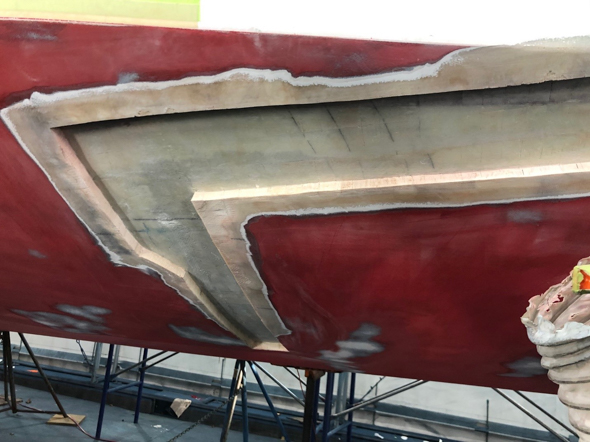 The damaged area had to be repaired by removing the outer layer of glass, removing the balsa core, gluing in new balsa core with epoxy and applying multiple layers of fiberglass vacuum-bagged in faired layers back into the hull. It sounds easy, but is takes an experienced composite specialist to make this repair and Steve Tillotson and Will Rook at MYC fit that description. The repairs were done sequentially in about four days and the hull under the waterline of the boat should now be as good as new (see photos). 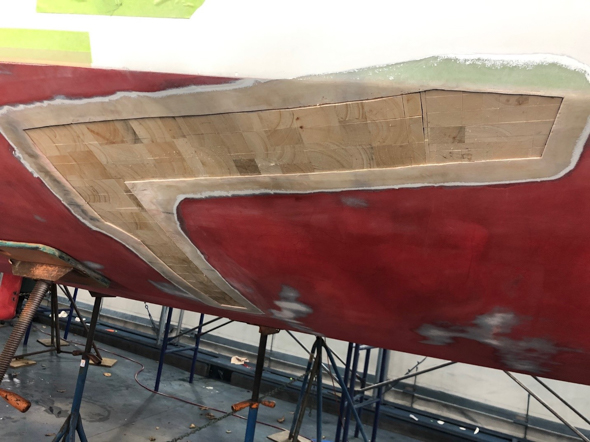 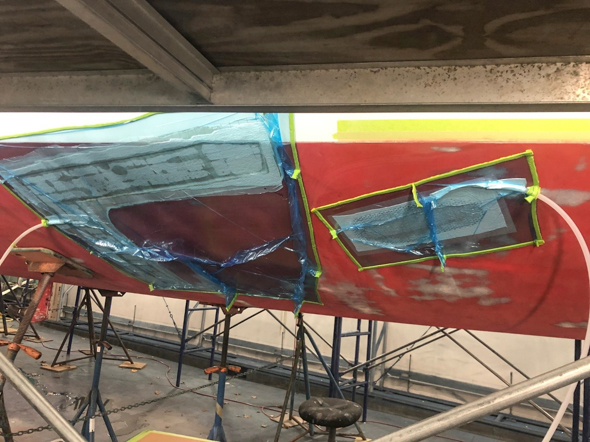 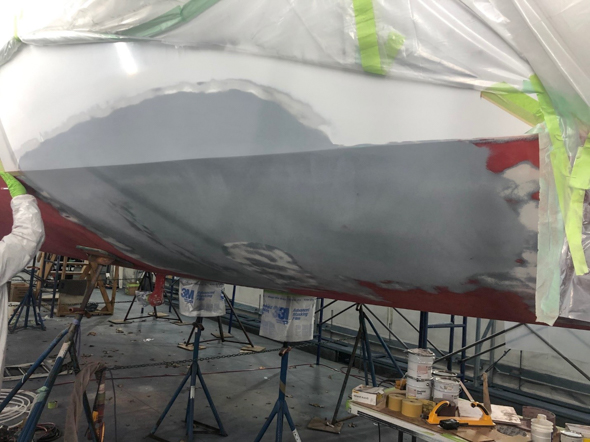 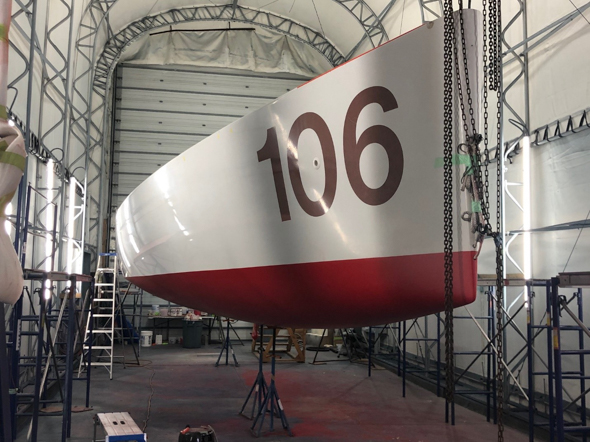